According to findings from trade association IPAF’s accident database the number of deaths jumped 65% to 28 fatalities in the first half of 2012.

IPAF believes that the accident reporting project is capturing more data, not necessarily that there are more accidents. 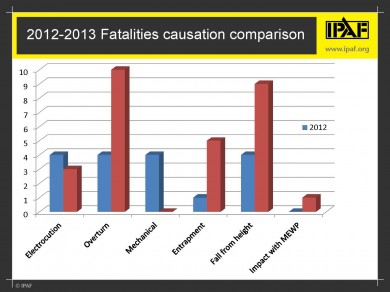 Thirteen of the fatalities involved booms, 10 involved scissor lifts and three involved vehicle mounts. In the other two cases, the machine type was unknown.

Of these fatalities two occurred in the UK with the USA accounting for 13 deaths, two each in France, Germany and the Netherlands, and one each in Armenia, Canada, Ireland, Malaysia, Norway, Spain and the UAE.

IPAF also updated the 2012 preliminary results following the reporting of a previously unrecorded fatal accident in Canada in October 2012. This brings the total fatalities in 2012 to 32.

“Findings from IPAF’s rental market reports lead us to estimate that there are more than one million MEWPs in the world,” said IPAF CEO Tim Whiteman. “Every fatality is one too many, but these figures show that powered access equipment remains a safe way to carry out temporary work at height.”

All data collected is confidential and none of the detail of any accident is shared with third parties or disclosed to safety authorities unless required to by legal writ. The only exception to this is that manufacturers will be given basic data if a machine manufactured by their company is involved in a fatal accident.

To register and to report an accident involving a MEWP or an MCWP, go to www.ipaf.org/accident

Smaller excavator delivery dates being pushed to 2022
11 months ago