The workers sustained injuries ranging from fractures and broken bones to cuts and bruising following a 13-metre plunge at the Abraham Darby Academy in Telford in August 2011.

Droitwich-based Adstone Construction Ltd was prosecuted by the HSE after an investigation identified failings with the steelwork that gave way.

Shrewsbury Crown Court heard that key pieces of the canopy truss steelwork were insufficiently welded together.

As a result when the roofing contractors added further materials to the roof, key welds failed and the structure collapsed – taking the roofers with it and causing enormous damage to the front of the new school where Kier was main contractor.

The collapsed canopy was 57 metres long and weighed in at over 40 tonnes.

A large vertical steel support column for the canopy, called the ‘skylon’ also collapsed as a direct result of the canopy failure.

One of the roof workers, Philip Drury Jr, 29, from Mansfield, was air-lifted to hospital strapped to a spinal board and in a neck brace. He was discharged after two days with damage diagnosed to two vertebrae and his shoulder.

Another worker, Mark Drury-Tuck, 32, who lives in Ripley, was taken by ambulance to hospital where he was kept in overnight for observation. He was left with pain in his ribs.

A third, Joshua Wolak, 24, from Edwinstowe, was kept in hospital overnight with a suspected fractured rib and multiple cuts and bruises.

The fourth, James Buchanan, 32, also from Edwinstowe, suffered arm injuries and swelling and bruising to his neck. He had to wear a neck brace for the two days he spent in hospital, and needed ultrasound scans and x-rays.

The final roof worker, Philip Drury Sr, 54, from Mansfield, had a fractured ankle, three cracked ribs with internal bruising, head injuries and cuts and bruising to his face and head.

Adstone Construction of Lovett Industrial Estate, Droitwich, was fined a total of £100,000 and ordered to pay £106,098 in costs after pleading guilty to a safety breach.

Speaking after the hearing, HSE inspector Andrew Bowker said: “This incident had enormous potential for loss of life.

“The canopy collapsed suddenly and violently without warning taking the five roofers that were on it down over 13 metres to the ground on what can only be described as a terror ride. It is a miracle that they were not more seriously injured or even killed.

“Other construction workers had been working directly under the school canopy for most of the day installing windows in the new school. Fortunately they were not under the canopy when it collapsed.

“Adstone Construction Ltd fabricated the steelwork for the canopy and failed to ensure that critical welds within the design of the steel truss were completed to the required specification and size.

“This failure led the canopy to collapse as more roofing material was added.

“It is vital that companies carrying out this type of work have suitable and sufficient quality control measures in place in order to ensure that the structural integrity of the new building is never in question.” 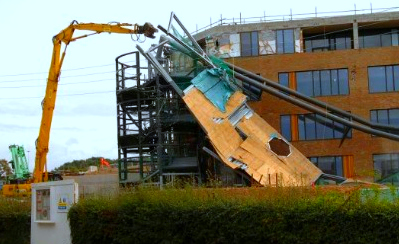