The Construction Products Association’s latest forecast predicts rapid increases in private house building, together with growth in the infrastructure and commercial sectors.

Together these will drive activity up 4.5% this year and promise another two years of good growth on top . 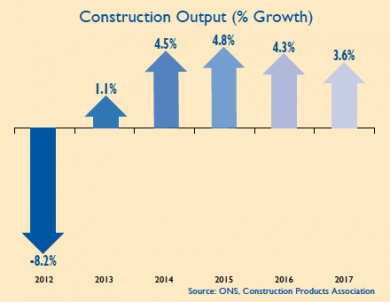 “The construction industry is now on track to grow 18% by 2017 and contribute an additional £20bn to the UK economy.

“It’s important to note that private house building only accounts for 15% of total construction.

“Commercial, the largest sector, is expected to grow each year up to 2017.  The office sector in particular has recently shown growth, though demand is mostly in Central London.  We forecast offices construction to increase 7% in 2014 and 10% in 2015.”

He added that last year’s gains in the infrastructure sector would continue to 2017 when levels are anticipated to be 42% higher than in 2012.

Recently, rail has been the fastest growing infrastructure sector. It now looks forward to a steady £38bn investment programme by Network Rail over the next five years.

Francis said:  “The main risks to our forecasts arise around the issue of energy.

“Construction and manufacturing firms have serious concerns regarding energy security and supply.

“Constant delays to the nuclear programme and uncertainty regarding investment in gas-fired power stations only exacerbate these concerns.”

Other key points in spring forecast

Insolvency Service investigates after contractor goes into liquidation
7 hours ago

Strongest rise in output for nearly five years
8 hours ago

Pandemic to cut margins to 0.5% this year but contractor confident in long term prospects
11 hours ago