The go-ahead for demolition of the existing buildings at the Cornish Coliseum site near St Austell is still subject to a bat mitigation licence being granted by Natural England.

Developer Commercial Estates Group was granted permission in 2011 for around 500 owner-occupied and all-year-round holiday let apartments at the site.

The recession meant the development, including shops, restaurants and leisure facilities, had been put on hold. 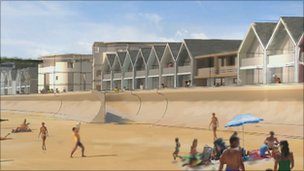 Jon Kenny, development director at CEG, said: “The demolition is dependent on all planning approvals being in place before it’s feasible to start the process, so we very much hope that we’re able to push the button this spring and begin to bring the resort into fruition.”

He added that CEG’s plans were also reliant on Natural England issuing a bat licence, granting permission for work to take place in an area where the animals roost.

If the licence is not granted in time, Mr Kenny said work on the Coliseum could be delayed until later in the year.

The construction phase of the scheme is expected to last three to five years and sustain some 500 jobs.