According to the London Office Crane Survey by Deloitte, the volume of new starts increased by 10% from the previous survey in May, to 3.4m sq ft between April and September 2021. This rise is holding starts in space terms well above the long-term average of 2.4m sq ft. 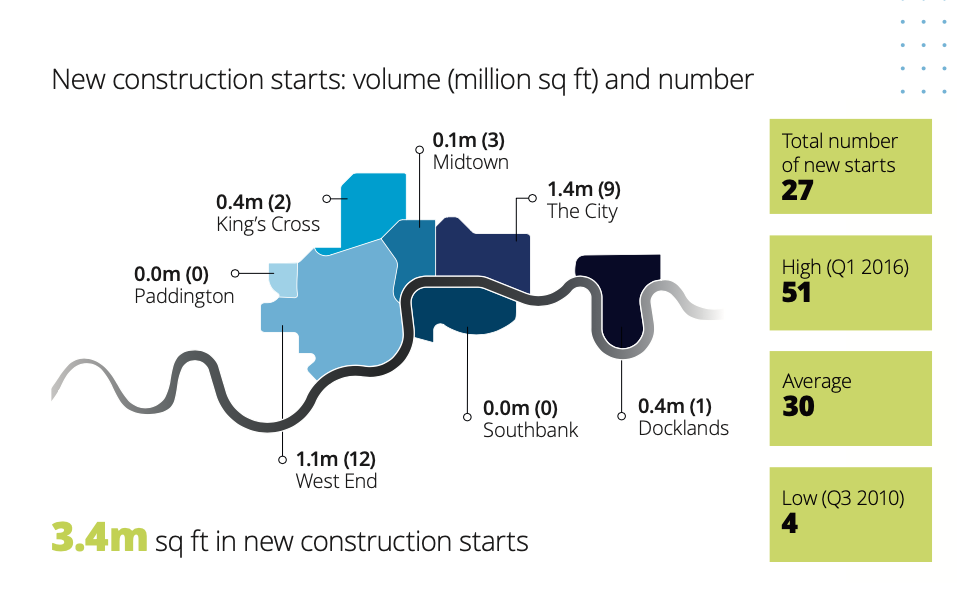 The average scheme size has risen by 28%, demonstrating a greater appetite to take on risk on individual schemes.

Mike Cracknell, director in real estate at Deloitte, said: “The volume of new starts points to the resilience of demand for offices, in spite of the dramatic shift in working practices in response to the pandemic and months of home working.

“The survey shows a rise in pre-lets of new construction starts with 19% observed this time, up from 10%.  Alongside this, there have been high levels of speculative development – above the survey’s long-term average.”

He added that the very high proportion (85%) of new starts that were speculative reflected developers’ ability to ‘look through’ the short-term effects of the pandemic to a future where occupancy and demand will rebound, even if working patterns and office configurations also change.

Developers are now less concerned about the impact of home working on demand for office space than they were at the onset of the pandemic.

More than a third (37%) predict home working will have no impact on leasing demand, three times the proportion (12%) compared to 12 months ago.

The survey in September pointed to a slight easing in the proportion of office refurbishments over new builds, although refurbishments still account for 54% of new start volumes. 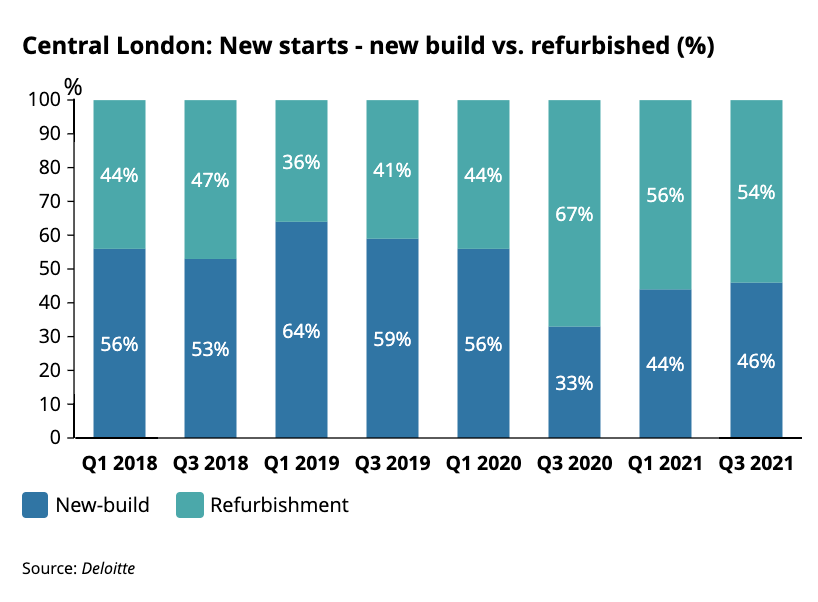 Philip Parnell, real estate valuation lead at Deloitte, said: “The uptick in new builds over the past three surveys has not disrupted the trend towards refurbishments – a structural shift we believe is happening driven not least by sustainability considerations.

“In addition to the cyclical attraction of refurbishments in uncertain times, concerns over embodied carbon has also prompted an aversion to outright demolitions. The focus on refurbishment over redevelopment is unlikely to diminish as carbon accounting including embodied carbon and the drive to net zero continues to gather momentum.”

And a quarter of developers said they expect all their new developments to be net zero by 2024, and 45% expect to achieve this between 2025 and 2029.

Deloitte’s research also shows developers (90%) are more optimistic about leasing demand than six months ago, with more than a third (35%) finding it “much better” and 55% “a little better”.

Reflecting this optimism about leasing demand, almost two-thirds (65%) of developers expect their pipeline to increase and none expect it to fall, compared to just 7% and 29% respectively in the Winter 2020 Survey.

Development joint venture will see at least 2,800 homes built across the county
20 hours ago