That is the conclusion of an in-depth study by a leading cost consultant mapping average maintenance cost data supplied by 20 registered housing providers in London over an eight-year period.

Killian Hurley, founder and CEO of Mount Anvil, said: “Not considering what impacts Opex at the outset is like one part of the business taking out a payday loan and then asking another part of the business to pay it back, interest and all. Good idea at the time, terrible in the long run.”

He said: “Cost and time, the other two parts of the famous “triangle”, make themselves known early on in a project.

“Quality, however, is judged by resident happiness and long-run maintenance cost. That spend can end up 5 or 10x the upfront capital investment.

“But it’s only the latter that we scrutinise. So, we asked Arcadis to delve into this and quantify the true cost of poor quality — what does a pound or an hour misspent upfront cost RPs, the long-term holders of the homes we partner to deliver, in the future?”

Against a backdrop of scarce quantitive industry data, Arcadis focused on the leading housing association’s operational maintenance and repair costs.

Researchers uncovered wildly varying spends on maintenance, although original capex spend is not included in the published data.

From these results, it infers cutting corners on capex could be costing social landlords dearly in operational maintenance costs down the line.

Researchers found that average annual maintenance costs per unit differed significantly between housing associations within a single year, often by as much as 350%.

The range has been decreasing over time, but the costs at each end of the spread still differed by 250% in 2020.

Over the eight-year reference period, the average cost of a notional 1,000-home estate managed by registered providers associated with low maintenance cost was around £12m, whereas those with higher costs would typically pay £23m.

Another issue presenting challenges for housing associations is that maintenance cost inflation has outstripped rental income.

The gap between rental growth and the growth in maintenance costs was revealed to be between 2.0% and 3.1% per annum 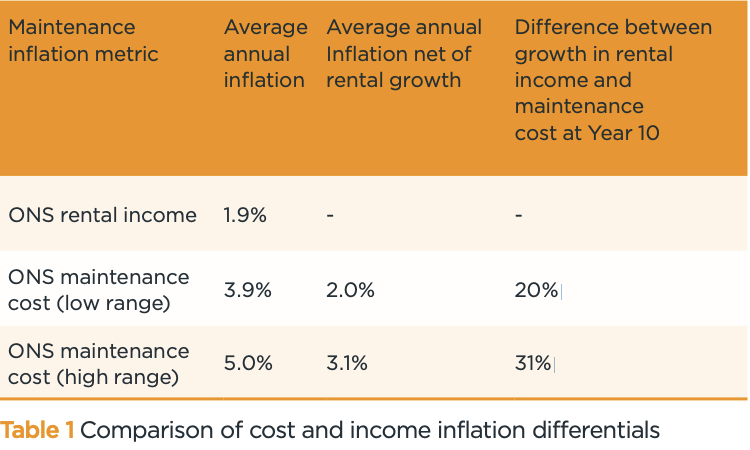 Hurley said that the findings highlighted the benefits of thinking about operational issues early, minimising the future risk of excess maintenance costs through the design and construction of new homes.

He added that faced with multiple challenges regarding customer experience and decarbonisation, it was even more critical that the industry had a clear understanding of the interdependencies between Capex and Opex costs.

“With Capex investment likely to increase, it is essential to be able to evidence the advantage of investing in quality from day one.”

Not all procurement routes are equal

Delivering quality is a team effort – collaboration between client, consultants and contractor is critical to success.