The deal is expected to deliver £60m in operational savings and create a business with sales in the order of £1.8bn.

Although Anglo American maintained there would be virtually no job losses as a result of the merger.

The as-yet-unnamed venture would employ a combined 7,300 staff, making it a dominating force in the UK, alongside Cemex and Hanson, now part of Heidelberg Cement.

The mining giant put its Tarmac arm up for sale several years ago but struggled to find a buyer. The firm said it would still seek to exit UK construction materials and planned to sell its interest in the joint venture eventually.

Cynthia Carroll, chief executive of Anglo American, said: “We are excited to be bringing together two high quality and complementary UK businesses to create a compelling new industry proposition through which we expect to unlock significant value.

“While Anglo American’s objective remains to divest its interests in the joint venture over time, this transaction positions us well to maximise value.”

Bruno Lafont, Chairman and Chief Executive of Lafarge, said: “This new leading construction materials company, built on the strengths and proud histories of two great teams, will create more value to customers, with an enhanced and larger offer of products and services.

“For Lafarge, this deal is cash neutral, is accretive to Lafarge shareholders and illustrates our strong commitment to the UK market.”

The joint venture will operate with its own board of directors, led by an independent chairman and executive management teams drawn from both businesses.

Both UK businesses will operate independently until the regulatory authorities clear the deal.

How they shape up 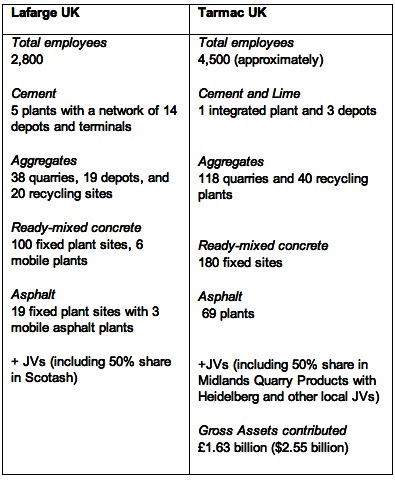 Contractor fined £80,000 after employee fell through fragile roof
7 hours ago

Average weekly pay tops £1,000 in London, the South East and East of England.
3 days ago

1,000 site visits planned in coming months to check how workers are moving heavy or bulky materials
6 days ago

Historic Pumphouse at Stanley Dock to be transformed
7 days ago