Ministers still have many PFI projects under review after complaining that they waste money, particularly during the operational phase.

But Treasury figures, obtained by Channel 4 News, shows that more PFI projects are due to reach financial completion this year than when Gordon Brown was Prime Minister. 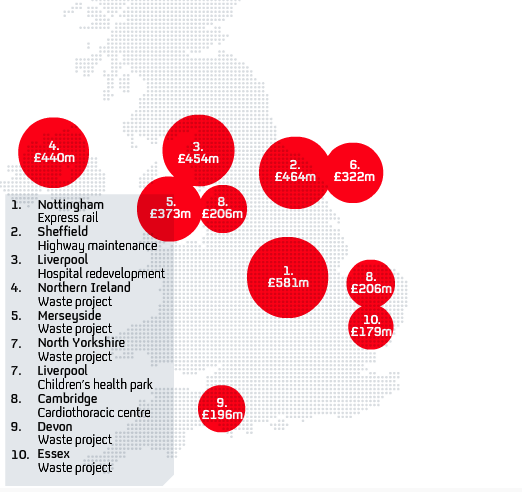 Sixty one schemes are in procurement due to be completed between now and March 2013, estimated to have a capital value of £6.97bn.

Before last May’s general election, Nick Clegg described the PFI model as “a bit of dodgy accounting – a way in which the Government can pretend they’re not borrowing when they are, and we’ll all be picking up the tab in 30 years”.

David Cameron highlighted PFI contracts as an example of Labour’s wastefulness while in power, in a speech to the Conservative spring conference, claiming in one hospital it cost £333 to change a light bulb.

But now it has emerged that the Coalition is pressing ahead with a raft of PFIs, including 11 Department for Education projects and 17 at the Department for Communities and Local Government, according to Treasury figures.

One leading contractor told the Enquirer: “This is obviously very good news for the industry, but it is also worth putting this into context. Several PFI schemes have fallen by the wayside so it would be wrong to think PFIs are moving ahead on all fronts.”

“Things are not as bad as first feared, but it is not as good as they could be.”

The CBI has also been campaigning hard for a more positive attitude in Whitehall to PFI.

It argued the role of the private sector in supporting new infrastructure will become even more important in coming years.

The latest generation of municipal energy from waste schemes are the biggest benefactors going forward, followed by health and transport schemes, like the Royal Liverpool and Nottingham tram.

A Treasury spokesman said: “PFI must only be used to deliver a project where it can be shown to be good value for money.

“Going forward all PFI projects will be considered in line with new guidance issued for major projects.

“This will set an approvals and assurance plan for each project that is based on the value and risk associated with the project, so ensuring all projects receive a suitable level of scrutiny.

“There is clear evidence of excesses in some of the older PFI contracts. We are determined to save money where we can which is why we are running a savings pilot at Queen’s Hospital, Romford.”