According to the National House Building Council new house registrations jumped 21% to 13,307 compared to a year ago and were 49% higher than February.

Registrations for new homes at the Athletes’ Village accounted for 2,800 starts. But even setting aside this figure monthly registrations were still the highest they have been in eight months.

Figures for January  – March, which give a better indication of trends, rose 7% on the same period a year ago. But growth in starts was confined solely to Greater London

Imtiaz Farookhi, chief executive of NHBC, said:  “March’s figures offer encouragement to the sector during a month in which the Coalition’s Budget announced significant changes for all house builders.

“Planning strategy, the zero carbon definition of a new home and the New Homes Bonus were all included in the Budget and the fact that new home registrations held up is a positive sign.

“While a large proportion of registrations were driven by plans at the Athletes’ Village, housing analysts have reported better than expected growth in house building during the first quarter of 2011 and our figures for March certainly reflect this positivity.

“Hopefully Government measures designed to incentivise the building and buying of new homes will deliver a level of stability and reassurance for the market and encourage its growth.” 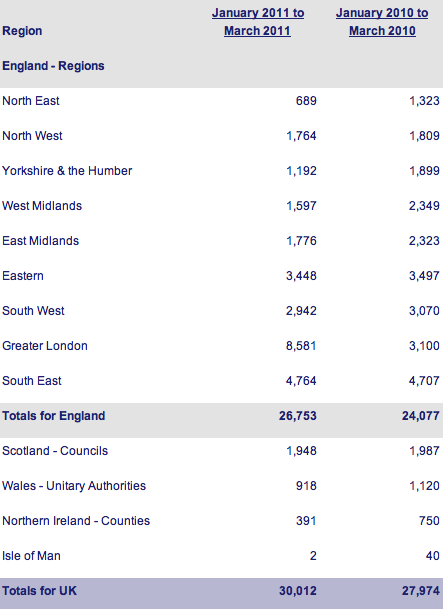