Latest figures from the National House-Building Council show that housing registrations in the North and Midlands have tumbled 30% during the last three months.

But in London, the South East and Eastern region housing starts have rebounded strongly, up nearly 50%.

Over the period from March to May, the North East was hardest hit by the house building slump, down over a third against an already depressed period last year.

Yorkshire and Humberside and the West Midlands saw housing registrations drop a third, with the East Midlands also dropping dramatically.

Only the North West seems to have weathered the slowdown at just 8% down.

Meanwhile down in the south, registration were up around 10%, with London registered homes doubling in number.

The London figure was boosted by the inclusion of the Olympics Athletes’ Village, but shows a surge in activity led by cash overseas buyers and housing association starts.

The NHBC’s monthly figures for May showed that overall registration were largely flat with the growth in the south offsetting the sharp decline in the north. 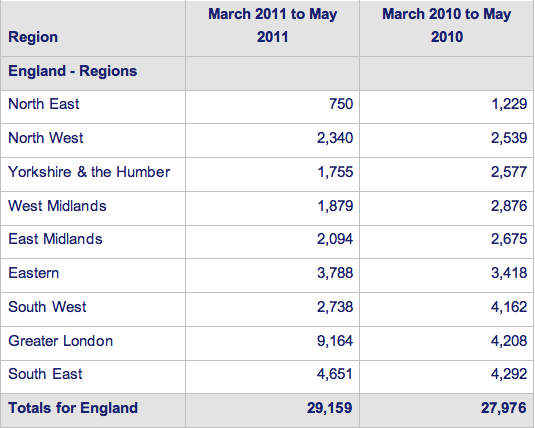