The developer confirmed it is making preparations to start the first two residential plots on the massive site where around 10,000 homes are eventually planned to be built.

In a trading statement today, Quintain said: “Enabling works are planned to start soon, which will include the rebuilding of the river wall as well as further infrastructure and ground works.

“We continue to progress with the commercial district at Greenwich Peninsula where, together with our partners Lend Lease Europe, we have agreed heads of terms with a serviced office provider for 10,500 sq ft at Mitre Passage.”

Work rebuilding the river wall is presently out to tender and is programmed to start in October.

The £4m project to renew the wall near the O2 arena will require replacement of around 150m of sheet piling.

Mike Turton of Gardiner and Theobald’s London office is handling the procurement process,

Eventually the developer hopes to turn the 150-acre site into an extensive new quarter of London, which is expected to boast the largest mass of green roofs in Europe when complete.

At the heart of the scheme is Peninsula Central – a new business district for London. 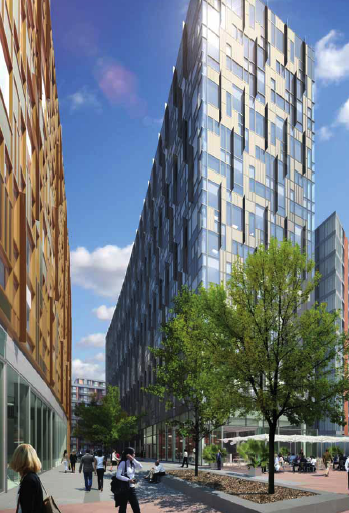 Heads of agreement have been signed for 10,500 sq ft at Mitre Passage building

At Quintain’s big Wembley redevelopment the developer said it had agreed the £53m sale of a key development with property investors Keystone Partners which plans to build a 660-bedroom student accommodation block.

On the latest phase of the main Wembley scheme construction is on course to start before the end of the year on a 350,000 sq ft retail and leisure project.

Brent Council has issued a recommendation to grant approval for the planning application and now Quintain is waiting for final endorsement from the London Mayor’s office.

Quintain is finalising Section 106 negotiations with the council which have been agreed in principle.