Southampton council has received a planning application for  the Admiral’s Quay scheme, which would see the city’s tallest building.

The full scheme consists of three residential towers containing 299 homes, connected at ground level, with an elevated terrace and provision for up to eight restaurants.

Councillor Royston Smith, Leader of Southampton City Council said: “This is a great boost for Southampton’s waterfront and will bring further life to Ocean Village and valuable jobs to the city.

“This scheme alongside the plans for Royal Pier Waterfront will mark Southampton as a leading waterfront destination in Europe.

Peter Morton from Allied Developments said: “Our development will be finishing off Admiral’s Quay and end the desolate building site surrounded by a hoarding that has blighted Ocean Village for years.

“It will now realise its full potential as an exciting mixed-use development situated on the marina, giving the city a waterfront destination to be proud of.” 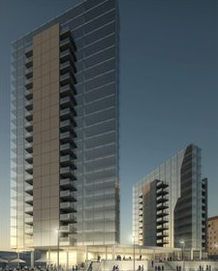 Work to start later this month on 2.5m taller sea defences
10 months ago

VolkerRail, Atkins and Colas among big winners
10 months ago

5.2km bypass on A77 in south west Scotland will employ 165 workers at peak
10 months ago

Contractor gets underway on three-year build programme
10 months ago

Morgan Sindall, Osborne and Speller Metcalfe among winners
10 months ago

Around 500 workers on site at peak periods.
1 year ago

Morgan Sindall beaten in race for 11,500 home site
1 year ago