The firm had been monitoring the perimeter wall for movement, which stood above a lower ground level section of new school building.

A 3m section of the wall beside a bus stop collapsed into the site yesterday at around 2pm, fortunately nobody was waiting at the bus stop or working in the area.

King Edward VII headteacher Bev Jackson told local newspaper The Star workers had been monitoring the wall every day to check there had been no movement caused by the building works.

“It’s a mystery – although there has been a lot of rain this week on dry ground and that could be a factor,” she said.

“There’s a lot of rubble which has fallen down towards the school but that is all. But it is lucky that no-one was working in the area and that no-one was at the bus stop.”

In a joint statement Sheffield Council and Vinci said that until the investigation was complete “it is difficult to estimate with any accuracy the time it may take to carry out the required repairs”.

It added that the council and Vinci were working to ensure this work was carried out as “quickly and safely as practicably possible to minimise any further disruption”. 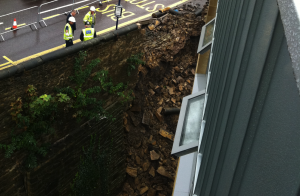