The £35m project will improves access to the theatre complex and creates a new café, a rooftop garden and a workshop.

The brutalist concrete building designed by Sir Denys Lasdun was famously damned by the Prince of Wales who described it as a “clever way of building a nuclear power station in the middle of London without anyone complaining”. 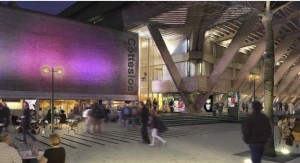 The job will see the theatre on the South Bank opened up to create an extra 10,000 extra seats per year and reveal what goes on backstage.

The redesign also includes a four-storey extension on the south side of the theatre, plus a high-level public walkway through the backstage and workshop areas.

The foyers will be refurbished, the front of the building will be opened up to passers-by and an estimated 50,000 people will visit a new education centre every year.

The main entrance, bookshop and stage door will be moved, with extra greenery added to the terraces and a paint studio built on the south side.