Economists at the influential Construction Products Association have downgraded their previous forecasts of a 3% decline in workload in 2012 to an eye-watering 5% drop.

Crystal ball gazers are now far more pessimistic about the impact of the Eurozone crisis and downturn in consumer spending.

The predicted fall will not be as harsh as the 8% drop in 2008, which hit mainly house building trade contractors. But this time around bigger builders will feel the squeeze as public building work dries up and office orders dwindle.

Next year growth is expected to remain flat before the industry sees signs of recovery in 2014.

But by this time industry output will have been chopped down by 12% compared to peak output achieved in 2007. 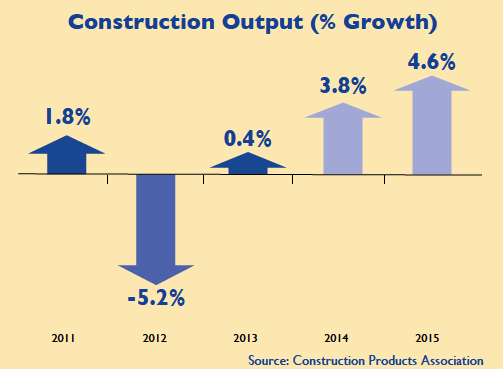 CPA forecasters also warn all risks are downside ones, and deliver a serious health warning if the Eurozone crisis deepens.

In this worse case scenario, construction would be in even worse trouble next year with any hope of recovery delayed until late 2014.

Michael Ankers, chief executive of the Construction Products Association, said:  “For the construction industry to return to growth there needs to be a strong private sector recovery, but this is just not happening.

“Continuing uncertainty about the future of the euro zone and a lack of consumer confidence in the UK are holding back important investment decisions.

“As a result the largest area of construction activity – private commercial work- is forecast to fall by a further 5% in 2012 and remain at that level in 2013.

He warned” “At the same time the cuts in public sector construction activity are really beginning to bite, with construction work on schools, hospitals, and other non-housing work forecast to fall by 23% compared with 2011.

Despite the encouraging announcements on public sector investment on infrastructure projects in the Autumn Statement, capital spending on construction will still fall 30% by 2013.”

“Although new housing starts in the private sector are set to continue their slow recovery, in the short term these are more than offset by the sharp fall in public sector housing.

“As a result the number of new homes started in 2012 is forecast to be 5,000 fewer than this year, and at just 113,000 this is less than half the number of homes needed to accommodate the additional number of households expected to be created over the next 12 months.”

Over 4,000 staff will transfer to the fast-expanding industrial services group
23 hours ago