Watson Steel has erected the 200ft north intermediate tower near the Emirates Royal Docks terminal, the smallest of the three main towers.

Over the coming months, Londoners will see the two further white structures rise up to the skies with construction of all the towers scheduled to be completed by late spring 2012.

Each tower will be made up of approximately 6,500 steel pieces that measure between 30 – 50mm with each steel block weighing approximately 30 tonnes on average.

A complex helix like structure was introduced by Mace and was a design developed by Aedas with the connection and helix structure developed by Watsons.

The first tower was built by Watson within days of its steel pieces being delivered to site. Over half of its 200 factory workers are dedicated to the project.

Matt Randall, project director said: “All credit goes to the project team who have been working round the clock seven days a week for the month of December to achieve this important milestone.” 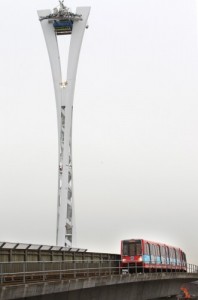