The Government will now start work on a Parliamentary Bill to clear the way for construction on the £17bn first phase as early as 2017.

She is also expected shortly to unveil the firm that will take the development partner role, worth up to £70m.

Turner & Townsend, Mace/Atkins, CH2M Hill and Parsons Brinckerhoff have all been bidding for the key promoter role.

The industry rumour mill suggests Balfour Beatty’s consultancy arm Parson’s Brinckerhoff is favourite to secure the job, which would preclude it from bidding for major detailed design packages.

The giant project could provide a vital shot in the arm to struggling UK consultants, who have already prequalified for £350m worth of design and consultancy work along the route.

The transport secretary also revealed more details of measures to mitigate the worst affects of the line, which will see journey times between London and Birmingham cut to just 49 minutes.

A new tunnel as the line passes through Ruislip in West London will remove all noise and visual impacts in that section of the route, and extended tunnelling  in the Chilterns will bring further benefits to that area.

The length of the line which is in tunnel or green tunnel has been increased by over 50%, to around 22.5 miles in nine individual sections.

In addition, around 56.5 miles of the 140 mile route will be partially or totally hidden in cutting, and the amount on viaduct or embankment  has been substantially reduced.

This means that well over half of the route would be mitigated by a tunnel or cutting.

Even with these concessions to anti-HS2 campaigners the project faces a bumpy ride thropugh Parliament and is widely expected to be delayed by legal challenges.

The hybrid bill process allows members of the public to send in petitions and could lead to protracted battles in Parliament. Some campaign groups may go for a judicial review of the government’s plans.

The Government has argued that the scheme, including the second phase Y-shaped extension to Manchester and Leeds, will generate £44bn of benefits to the economy over 60 years.

During 2012 the Government will also undertake informal consultation on thse plans and for the spur to Heathrow Airport.

These proposals will then be subject to a detailed public consultation.

The Government said the phased approach helps to smooth the funding requirements as construction progresses, so that no more than £3.5 billion of public funding  would be needed in any single year. 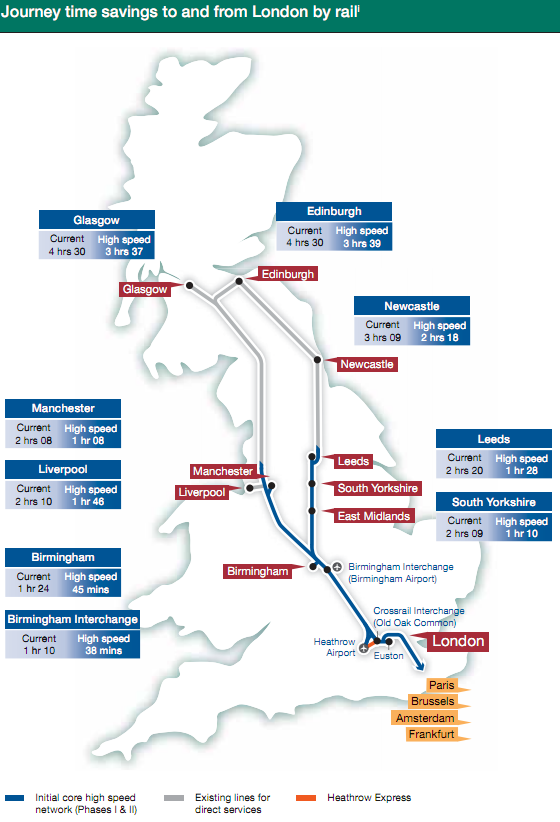