But output was down 1.6% compared to the same month last year, which was depressed because of bad weather.

Noble Francis, Construction Products Association economics director said: “Construction output remains extremely subdued having fallen for three of the previous four months and output in the fourth quarter of the year is now likely to fall, mirroring the recent disappointing economic news from the manufacturing sector.

“The recovery in private sector construction is still very sluggish and with the anticipated sharp falls in public spending on construction in 2012, the industry is now expected to see a fall in output of over 5% this year, with no sign of recovery until 2014.” 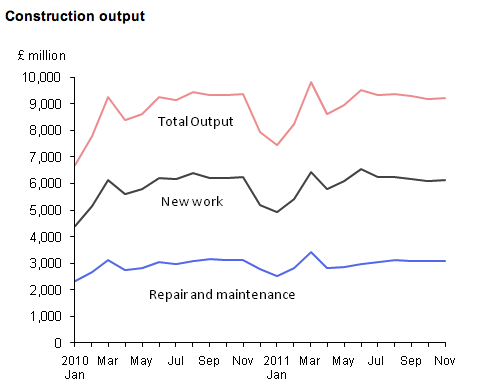 The three-month trend figures from September to November compared with the same period in 2010 showed construction output fell by 1.2% (-£338m).

New work was down 1.3% and repair and maintenance fell by 1%. New infrastructure work recorded a significant increase, jumping 15% (+£436m).

Private commercial new work was also up 2.8% despite growing fears that the industry has hit the buffers. Non-housing repair and maintenance was also up 4% over the comparable periods.

Simon Rawlinson, Head of Strategic Research at EC Harris said: “This data reinforces the impression that for construction, the pain has been deferred, but has not gone away.

Third quarter data shows that there was an improvement in the order book, but work won during 2011 is still 15% down on the same period in 2010 – a truly grim prospect for the coming year.

He added that the latest data included new analysis of output by different sizes of enterprise.

“Surprisingly, small enterprises employing four  people or under have increased their share of total workload from 15.5% in 1Q2010 to over 20% in 3Q2011.

“This increase in market share is at the expense of larger businesses employing 100 or more.

He added: “There are two possible explanations for this trend.  Firstly, an increasing number of construction businesses have shrunk to below the 4 employee threshold.

“The second explanation is that smaller, low overhead businesses are competing successfully for work in a very price competitive market, and that clients – main contractors and employers are ‘trading down’.

He warned: “This is hardly the model of a highly efficient, well trained and capitalised industry ready to drive the growth agenda.

“The implications for productivity, efficiency and low term development of skills in the construction industry could be significant if this shift to downscaling were to be sustained.”