The Connaught Tunnel was built in 1878 to run beneath the Victoria and Royal Albert Docks and was to be enlarged to take Crossrail trains.

Engineers originally planned to strengthen the central section of the tunnel beneath the dock by removing the existing steel linings and back filling the entire section with concrete foam.

These tunnels were then to be enlarged by boring through the concrete to create tunnels large enough for Crossrail trains to pass.

But sections of it are in such poor condition that contractor Vinci will now place cofferdams in the Connaught Passage between the Victoria and Royal Albert Docks, pump out the water and create a dry construction site allowing workers to dig down to the tunnel to undertake the enlargement work through a ‘cut and cover’ approach.

The work will save around £350,000 from the overall £50m cost of the project, which will now start after the London Boat Show next year. 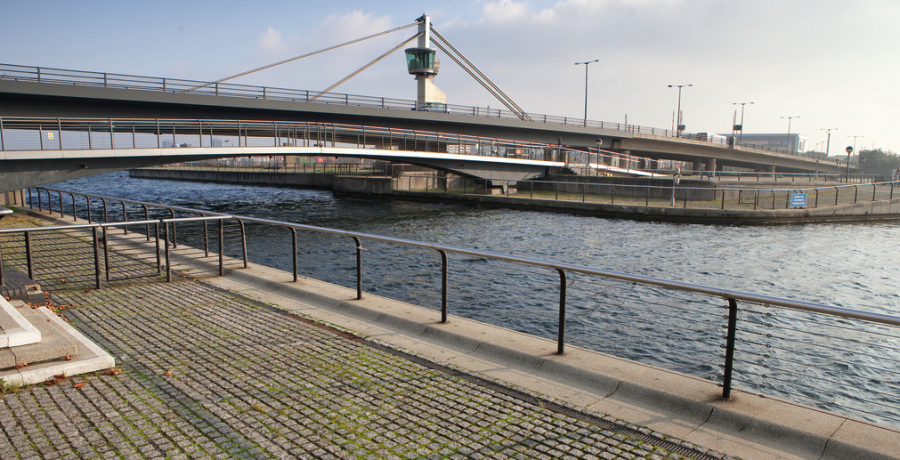 Location for cut and cover section of Connaught Tunnel widening

Linda Miller, project manager said: “The central section of the Connaught Tunnel is in a poor structural condition.

“To ensure we can undertake the tunnel enlargement work as safely as possible we have now decided to drain a section of the Royal Docks and then dig down into the tunnel.

“This will be the first time the tunnel has been exposed from above ground since its construction in the 1870s.

She added: “While we will be using modern techniques, we will be using a similar cut and cover approach that was used to build the original tunnel, which saw the tunnel constructed first with the docks then built over the top.”

During World War II, more than 40,000 explosive devices were dropped on London with the docks and rail lines particularly targeted due to their crucial role in delivering supplies to the British war effort.

Connaught Tunnel was hit by a bomb in 1940. Crossrail will be undertaking further repair work to the damaged section of the tunnel.