The upturn was driven by the rail, water and sewerage sectors where spending cycles are peaking.

But the UK’s leading infrastructure contractors have warned that signs of growth may be extinguished unless the government delivers on recent investment commitments.

While largely a sentiment survey this is the first time the balance has been positive since the first quarter 0f 2008. 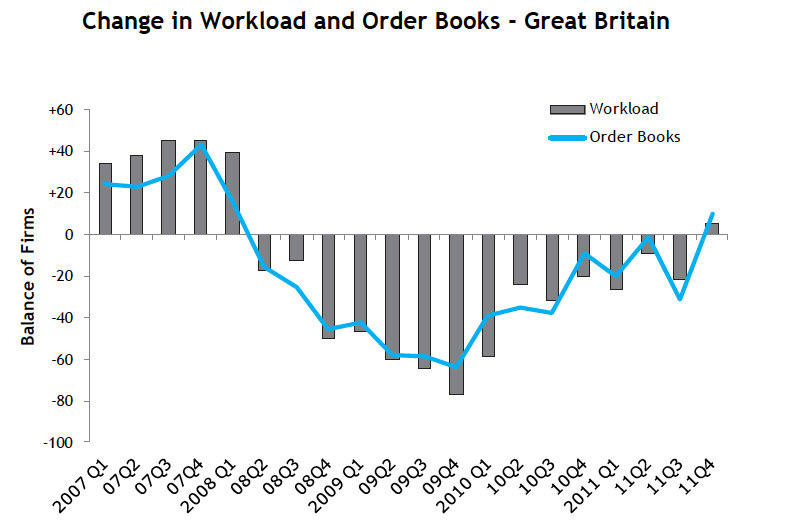 The government has identified the infrastructure sector as being critical to returning the UK economy to growth.

Yet analysis of the survey results shows that the improvement reported in Q4 2011 was driven largely by activity in the regulated sectors such as rail, water and sewerage. Activity in the publicly-funded roads sector continues to slide.

CECA director of external affairs Alasdair Reisner said: “Having experienced a long period of declining activity any signs of growth are to be welcomed.

“However, we would be extremely cautious about any suggestion that these figures suggest a sustained improvement in the sector.

“Most of the growth indicated comes from regulated sectors that are currently at or near the peak of their spending cycles.

“Our concern is that as spending in these areas falls away over the coming months, there may not be sufficient activity elsewhere to sustain workloads.

“For this reason it is essential that the government holds firm on its commitments to infrastructure made at the Autumn Statement. By doing so it will help secure vital contributions to growth, while supporting the future of the UK’s infrastructure supply chain.”

Covid blamed for construction delays and cost increases
22 hours ago