Despite Government efforts to push through several alternative funding initiatives for social housing, starts fell 20% in January to 1,850, compared with 2,304 the year before.

The three-month rolling total for public housing starts was worse again, down a third on the same period last year.

There is now a widening gap between public and private sector homes which recovered 9% to 7,831 in January. But even these were 8% down on the three-month figures, which give a clearer pointer to trends.

Overall, the level of new homes registered with NHBC was flat in January but down 16% on the three-month year-on-year comparisons. 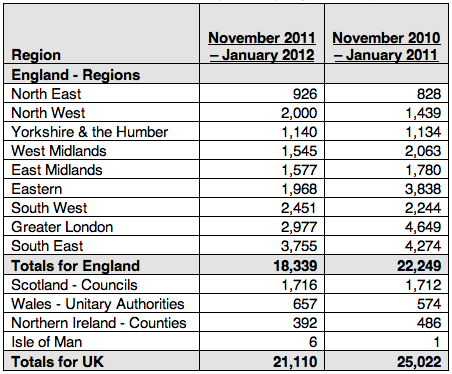 Richard Tamayo, Commercial Director of NHBC, said: “January 2012 volumes are, in aggregate, marginally up on January 2011 levels but with a slowing of activity in the public and social housing sectors.

“A variety of economic headwinds such as consumer uncertainty and restricted access to both development and mortgage finance have combined to restrain the growth in new home production that the country desperately needs.

“Government has targeted measures at stimulating and supporting both private and public housing supply; the next few months should begin to give us an indication of how effective those measures will be.”