The index jumped to 54.3 from 51.4 in January where anything above 50 represents an increase in output.

The figure puts the index at its highest reading since March 2011.

But the survey of buyers sentiment is add odds with the latest orders figures for the last quarter of 2011, which show new work falling to a 30-year low.

New construction orders last year fell 14% compared to 2010, and dropped to the lowest level since 1980, with the largest decreases being in other public new work (35%) and public new housing (28%).

Infrastructure orders rocketed 42% in the fourth quarter of 2011 compared to the preceding three months, while new public housing plummeted 27%.

Overall last quarter construction orders fell slightly by 2.5% compared to the preceding three months, according to the Government’s number crunchers. 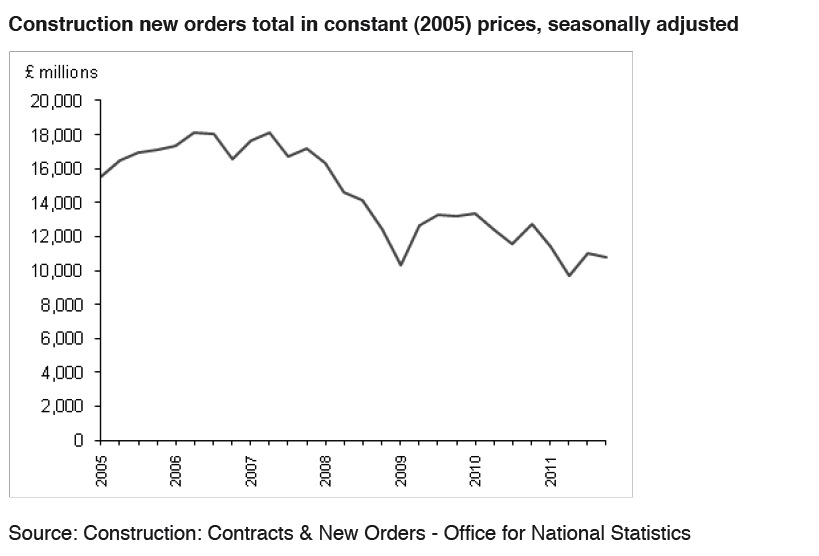 Simon Rawlinson, Head of Strategic Research and Insight at built asset consultancy EC Harris, said: “The PMI index does not appear to be picking up the significant downturn in public sector work reported in output and new orders data.

“Encouragingly for industry, the level of input inflation reported is at the lowest level for two years – this will reduce pressure on the supply chain, when in our opinion there is limited opportunity for price inflation over the next 12 months.”

“Overall sparkling infrastructure orders figures mask a significant decline in other sources of workload, ” he added.
“Resource pressure in the infrastructure sectors could be building while workload for the squeezed middle in public sector and commercial worlds face further challenges.”

David Noble, Chief Executive Officer at the Chartered Institute of Purchasing & Supply, said: “The construction sector’s relatively buoyant start to 2012 continued in February, as sustained growth affirmed the industry’s ongoing recovery from the financial crisis in 2008.

“However, the increase in new work from sizeable contracts was tempered by the moderate dip in overall employment.

“This has not dampened confidence, however, which is at the second highest level seen in 21 months owing to greater visibility of contracts down the pipeline.

“Commercial construction remains the star performer but housing continues to be subdued.

“This is symptomatic of weak demand that has been prevalent in the market. This week’s Bank of England mortgage lending figures, however, bode well for better housing performance ahead.”

Sarah Bingham, Economist at Markit and author of the UK Construction PMI said: “The slowdown in UK construction sector output growth recorded in January was reversed in February, with a solid increase in activity indicated.

“This was despite potential headwinds caused by poor weather conditions. The rise in output was supported by a stronger commercial expansion. Residential construction and civil engineering activity also increased, rebounding from contractions last month.

“Perhaps more encouraging was the sharp increase in new business received, which should keep firms busy in the coming months.

“Reports of rising tender opportunities and greater visibility over potential new work flows also helped to boost confidence about the year ahead, which rose to a nine-month high.

“The improved performance of the construction sector adds to other positive data released on the UK economy.

“However, it remains to be seen whether GDP growth for the first quarter will be recorded and, if it is, any expansion is likely to be only modest as general economic conditions remain fragile.”