But the stunt has raised serious questions about security at the site.

Members of the “London Consolidation Crew” of urban explorers have posted the pictures on their website.

Crew member Bradley Garrett described how they evaded security on his blog and climbed up 76 floors.

He said: “We waited for the guard to finish his current round and go into his hut.

“It took a few minutes of lingering before the walkway was clear of people – we grabbed on to the scaffolding pipes and swung off the bridge.

“Hanging on the freezing pipes, we pulled ourselves on top of the walkway and laid down out of view, waiting for a reaction in case anyone had seen or heard us. It didn’t seem so.

“Staying low, we then descended the other side of the scaffolding, right behind the security hut where we could see the guard watching TV, not the cameras.

“Quickly, we scampered across the yard and found the central staircase, again pausing to see if there was any reaction from the yard, phones ringing or doors opening. It was silent.”

The group then climbed 76 floors before taking photographs from on top of the building.

Main contractor Mace said the pictures were taken more than a year ago and security had been beefed-up since.

A statement said:  “We believe this is an incident which took place around December 2010 when we were undertaking both ground and structure works. The breach was discovered very soon afterwards and security immediately tightened.

“Today security on the site is tight with 14 night-time security guards on duty continuously who cover all areas as well as 25 CCTV cameras in operation together with a ground floor level laser alarm system.” 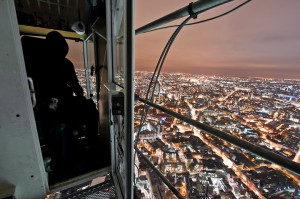 One of the urban explorers in the Shard crane cab