The event brought Liverpool city centre to a standstill when the puppets; ‘Little Girl’ giant at nine metres and her dog, together with her 15 metre tall uncle arrived, walking through the streets of Liverpool to re-enact their story, based on the Titanic and marking the 100th anniversary of the shipping disaster.

John Sutch Cranes’ role was described by the organisers as the, ‘ second most important aspect of the entire event’, after the creative team.

A number of crane types from the company’s modern fleet were used including tower cranes, all terrain cranes and city cranes, reaching heights of up to 40 metres.

A team of 20 people from John Sutch Cranes were involved in the scheme lead by Project Manager Paul Conneely.

“Manoeuvring and setting up 10 cranes safely throughout a relatively small and extremely packed city centre, across three days, involved a huge amount of planning and skill.

“The ambitions of the theatre group and the council were enormous and it was our role to help make their vision a reality. Through a real team effort, this has been achieved and we are privileged to be part of an amazing event which over half a million people came to watch and celebrate.” 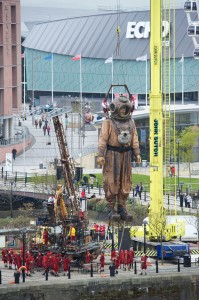