A Health and Safety Executive inspector identified multiple failings at a refurb project on a four storey block of flats in Norwood.

The court heard that the inspector served eight prohibition notices to stop dangerous practices at the site after identifying serious safety breaches. 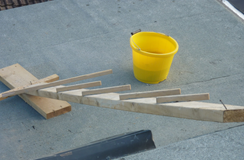 Dangerous systems and procedures for working at height at Croydon site

The HSE returned to the site two months later to discover little or no improvement had been made.

However, the manager in question failed to meet a compliance date of late November.

Bexley-based Unicorn Services was fined and ordered to pay £5,940 in costs.

After the hearing, HSE Inspector Andrew Verrall-Withers said: “Unicorn Services blatantly ignored enforcement notices and continued to neglect its duty of care to its workforce, most of whom were vulnerable migrant workers.

“The construction site at Sylvan Hill was a potential death trap, with scant regard for safety or employee welfare.

“Even though there were no reported incidents at the site, serious safety breaches were routinely committed that could have resulted in death or serious injury.

“The work was underpinned by poor management and appallingly inadequate paperwork – total recklessness according to the court.

He added: “General standards fell well below those expected of a competent principal contractor, which the Health and Safety Executive will simply not tolerate.”