Contract workers from scaffolding and painting specialists Taziker Industrial working below the bridge deck are having to dodge sudden toilet flush bursts onto the tracks.

Project manager Peter Cook said: “We haven’t had a direct hit but there have been several near misses.

“Usually this would not be a problem, but the older trains are running on a wooden bridge deck, which doesn’t protect from toilet waste.”

First Great Western confirmed that some of its older rolling stock still dumped toilet waste on the tracks and it had asked passengers to refrain from using the toilets as they passed over the historic bridge.

One passenger told the Enquirer: “The guard made a special announcement on the train’s tannoy as we came up to the Tamar River valley.

“I thought he was going to tell us we were about to pass over the iconic bridge, but instead he asked passengers to avoid using the toilets.”

“I suppose it’s a polite way of saying please mind the crap.” 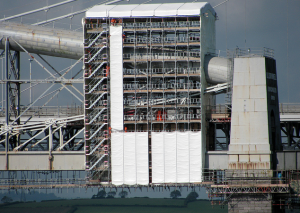 TI won the £10m job to restore the 1859 steel bridge between Devon and Cornwall last June.

In all, over 100t of new steelwork will be added, 205 original Brunel cross girders will be repaired, 40 diagonal bracings will be strengthened, and 1,800 individual steelwork repairs will be completed.

Up to 50,000 bolts have been purpose-designed to look like the existing rivets.

TI workers will also apply 35,000l of paint in four coats: a zinc primer, a strike coat all around the rivets and edges to build up the minimum thickness, a glass flake epoxy intermediate layer, and finally a Goose Grey polyurethane finish coat to match the original colour of the bridge.

The system is similar to that used on the Forth Bridge, but with a bit more elasticity because this bridge has more movement.