Bowmer & Kirkland and Bingham had both denied the charges following the collapse in July 2009 when the tower crane toppled onto an apartment block at Chandlers Wharf in Liverpool city centre.

The court heard the crane fell onto a partially constructed apartment block, across a road and came to rest on the flats.

Eight counterweights on the crane, weighing a total of 56 tonnes, broke free and crashed through the roof and six floors of the building.

Crane driver Iain Gillham, 55, from Woolton, fell from his cab onto the roof of the apartments and through the hole created by the counterweights.

He suffered multiple injuries including a brain haemorrhage, fractured skull, broken right shoulder, broken ribs, crush injuries to his left side, and major spinal injuries which resulted in his legs being paralysed.

No one inside the building was injured but residents had to be evacuated from the 64 apartments, and some were rescued from their balconies.

The damage to the building was extensive and residents were unable to return to their homes for nearly two years while major reconstruction work took place.

The HSE investigation into the incident found that the crane’s foundation could not cope with the forces generated by the crane.

During the construction of the foundation, both Bowmer and Kirkland and Bingham Davis Ltd agreed to cut away essential steel reinforcement bars from the four concrete foundation piles, so that the crane’s feet could sit on top on them.

These were replaced with four steel rods in each pile.

Summing up in court, Judge Gilmour said he was satisfied that it was the removal of the reinforcing steel and the inadequate replacement of the steel rods that led to the foundation being unable to cope with the forces of the crane.

This subsequently lead to the foundation being overloaded and the crane collapsing.

Bowmer and Kirkland was fined £280,000. A decision on prosecution costs will be made separately.

Bingham Davis has ceased trading since the crane collapse after going into voluntary liquidation. The company was fined a nominal £1,000.

Speaking after the hearing, the investigating inspector at HSE, Warren Pennington, said: “Serious failings on the parts of both Bowmer and Kirkland Ltd and Bingham Davis Ltd were uncovered by the Health and Safety Executive during an extensive and complex investigation into the crane collapse.

“Whilst it is bad enough that Iain Gillman will be unable to walk for the rest of his life as a result of the failings of both parties, it is no exaggeration to say it was only by pure chance that this catastrophic event did not result in multiple fatalities and significantly more damage to property.

“The circumstances leading to the collapse were a mess. Bingham Davis employees had no previous experience of designing the type of crane foundation used at Kings Dock Mill.

“Likewise, Bowmer & Kirkland’s employees at Kings Dock Mill had no experience of building one. Both parties made disastrous errors that were entirely preventable.

“The original error was made by Bingham Davis Ltd, which failed to spot a basic mistake in its calculations for the loadings imposed by the crane. This created a material risk which had the potential to have led to a crane foundation being constructed that was not strong enough to hold the crane up.

“During construction of the foundation, Bingham Davis advised Bowmer and Kirkland to cut away essential steel reinforcing bars in the foundation piles and replace such with steel rods.

“The removal of such reinforcing steel, resulted in the foundation being too weak to support the crane. The foundation was further weakened when Bowmer and Kirkland failed to ensure the adequate insertion of the replacement steel rods.

“Neither Company did enough to check what the result would be of cutting away this essential steel reinforcement and replacing such with steel rods.

“HSE hopes this case sends a clear message to the construction industry in relation to tower cranes foundations.

“Designers of such should be familiar with industry accepted guidance and follow it, unless they have extremely well thought-out reasons for not doing so.

“We will continue to engage with the industry to ensure that lessons are learned.” 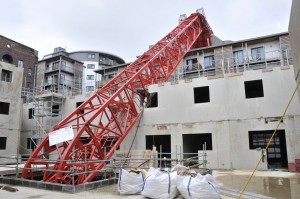