But the low level of orders makes the figures more volatile than they have been historically. And compared to the year-on-year comparisons, orders fell 4% pointing to a trend of the industry spluttering along in a declining market. 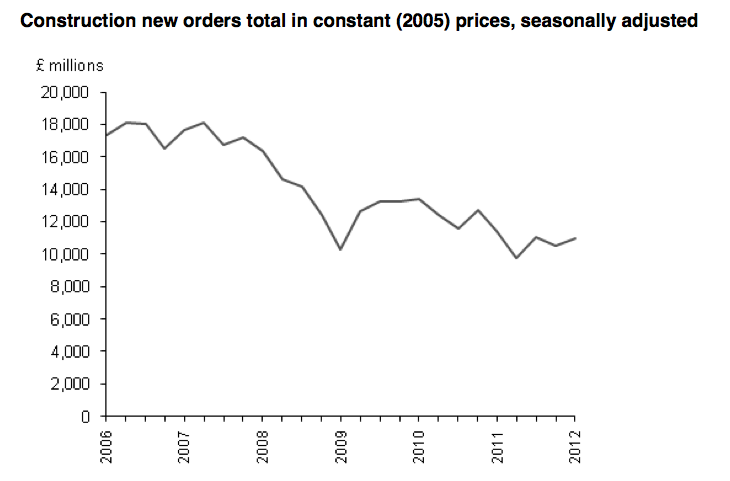 Within the headline figures, there was a steep quarter-on-quarter rise in private industrial new work and private commercial new work, which grew by 58% and 28%, respectively.

There were decreases in infrastructure new work (14%) and private new housing (11%), compared to the last quarter of 2011.

But infrastructure levels compared year-on-year are significantly better, up 60% on the first quarter of 2011.

Conversely publicly funded housing and building work is estimated to be 41% down on a year ago as expected from Government spending cuts.

Simon Rawlinson, Head of Strategic Research & Insight at EC Harris: “Latest New Orders figures provide some respite to the beleaguered construction industry but we have not turned the corner.

He added: “Construction should continue the growth path shown in recent monthly output data, and should return to growth in the 2nd quarter.

“However, volumes of new work will not be sufficient to make up lost ground during the year – forecasts for negative growth in 2012 are sadly well founded. “

Civil Engineering Contractors Association director of external affairs Alasdair Reisner said: “The case for infrastructure investment as the form of capital investment that delivers the highest rate of return has never been stronger.

“Between 1970 and 2005 infrastructure investment had a stronger positive effect on GDP than other types of capital investment, driving growth and creating jobs.

“Given the government’s focus on infrastructure as a means of delivering growth in the UK economy, CECA hopes that the decrease in infrastructure new work is an anomaly, rather than being symptomatic of wider problems.

“Despite the obstacles, we must rise to the challenge of facilitating infrastructure funding, even in a time of austerity. Failure to do so will result in an infrastructure deficit that acts a drag on UK GDP, preventing the economy from returning to health.”