The release of the images comes in the wake of Chelsea’s failed bid for the site after a consortium of Malaysian property developers entered exclusive talks to buy Battersea Power Station in a £400m deal.

A statement on the Chelsea website said: “It is important that our fans understand that Chelsea Football Club is not currently in discussions with the sellers of the site.

“The sellers have selected a Malaysian consortium as their preferred bidders, and we understand negotiations are continuing. We do not know if those negotiations will be successful or not.

“As per our previous statement, and as these images show, we believe the prospect of developing a new stadium on the site could be very attractive for the club, and would have the potential to become one of the most iconic stadiums in the world, offering many benefits for Wandsworth, for London, and, of course, for Chelsea fans.

“We firmly believe our proposals could address the unique challenges presented by the site.

“In creating an iconic world-class stadium we would preserve the four chimneys and wash towers along with the historically significant west turbine hall and control room, all to be restored and retained in their original locations.

“As previously stated, it is not appropriate to give further details at this stage of the process but we will keep our fans advised of any further material developments as appropriate.” 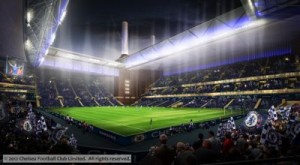 Covid blamed for construction delays and cost increases
11 hours ago

Mark Castle takes on another non-exec role
15 hours ago

Harrogate and Knaresborough leisure centre jobs get underway
14 hours ago

Work at the site, located 24 miles from Leeds city centre, is expected in September.
15 hours ago