The images form part of a major new exhibition at the Museum of London detailing how work first began under London’s streets in the 1860s.

Transport for London’s design and heritage manager, Mike Ashworth, told the BBC: “The cut and cover method was to dig a trench, build back the side and roof it over.”

It was a simplistic approach to tunnel building, with work happening just below the surface, Mr Ashworth said.

“There was so much disruption caused by demolition through a very crowded city.

“Most roads were already full of gas mains and other utilities and there would have been enormous upheaval as they had to shut roads.”

When Tube engineers adopted the more successful shield method it heralded the transformation of London’s transport network which now serves 270 stations on a service spanning 250 miles.

Ashworth said: “It is highly unlikely that our system would have developed to such an extent if it hadn’t left cut and cover.”

The shield, which was the technique used as the Underground expanded, was first successfully used in 1825 to excavate what is now the Wapping – Rotherhithe tunnel, which was one of the first underwater tunnels in the world.

Modifications by James Greathead and mechanised forms of the shield helped form the basis of Crossrail’s tunnel boring machines (TBM).

At the front of the original design there was an iron frame and within each pocket was a man with a spade.

Once each section was dug out, timbers were put up to support the earth before hydraulic jacks pushed the frame forward and a row of bricks was built inside the tunnel they had created. 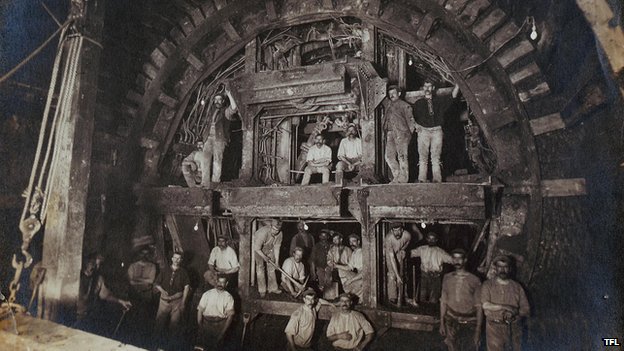 Workers dug by hand in the pockets of the shield

But Tim Shields, curator at London Transport Museum, said: “The shield offered the workers some protection but it would have been claustrophobic and very hot.

“They would often have been bare-chested but some pictures show them working in a jacket and shirt which is quite surprising.”

Andy Alder, project manager at Crossrail for the western tunnels, explained: “It was called the shield because it shields the men from the ground.

“The story goes that it is based on observing how worms bore through wood and this was pretty much the foundation for the main tunnelling work we are doing.

“All we’ve done is put a steel rotating cutter head with a motor at the front.

“There’s still then men digging, the jacks are still the same, then building the precast concrete sections behind and we have a railway that takes the ground out.”

Alder said the men digging the Tube could make the same progress in a year that the team behind Crossrail make in a week.