But the latest figures from the National House-Building Council did show signs of a recovery in the last three months of last year when they bounced by 17%.

During this period private homes starts up 14% and public housing showed their biggest rise for several years with a 25% uplift.

The gains were seen mainly in London and the south of the country although Yorkshire and Humber region also delivered a big rise in the last three months.

NHBC Commercial Director Richard Tamayo said: “In summary 2012 was a challenging year for the house building industry overall but ended on an encouraging note with Q4 figures 17% up on the same period for 2011.

“With Government-backed schemes such as NewBuy and Funding for Lending helping to increase mortgage availability, there are reasons to believe that 2013 may see the industry able to build on some of the positive momentum we saw towards the end of 2012, which does seem to be carrying over into January.

“Nonetheless, with house-building volumes so far below the numbers desperately needed in the UK, this is clearly an issue that needs to remain at the heart of Government policy.” 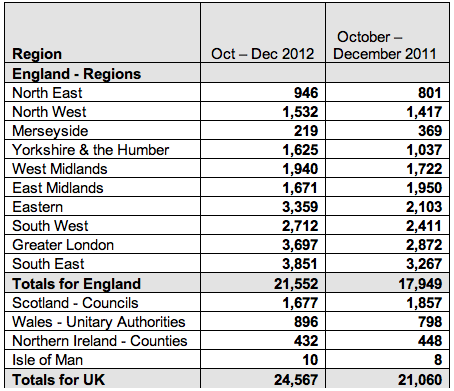