The preferred route north of Birmingham will stop at five new stations with construction work set to get underway in 10 years time.

The 211 mile northern route is expected to create 100,000 jobs and follows confirmation last year of HS2’s 140-mile southern phase one route between London and Birmingham which starts construction in four years and opens to passengers in 13 years. 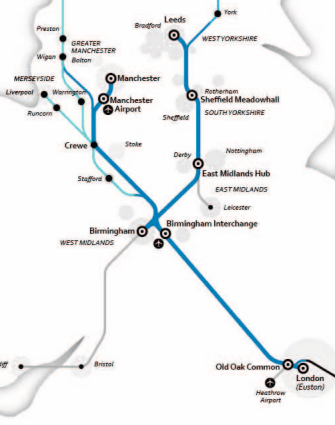 Prime Minister David Cameron said: “Linking communities and businesses across the country and shrinking the distances between our greatest cities, high speed rail is an engine for growth that will help to drive regional regeneration and invigorate our regional economies. It is vital that we get on board the high-speed revolution.

“We are in a global race and this government’s decision to make high speed rail a reality is another example of the action we taking to equip Britain to compete and thrive in that race.

“High speed rail is a catalyst that will help to secure economic prosperity across Britain, rebalance our economy and support tens of thousands of jobs.”