The extent of the fall was first flagged up in the GDP figures last week but more details have now emerged of the major hit on new output, which fell by £500m or 3.2%.

There were falls in almost all sectors of the industry, with the exception of private housing repair and maintenance which showed a modest increase of 0.4%.

Other new work excludes the housing and infrastructure sectors but includes construction of factories, warehouses, schools and offices. 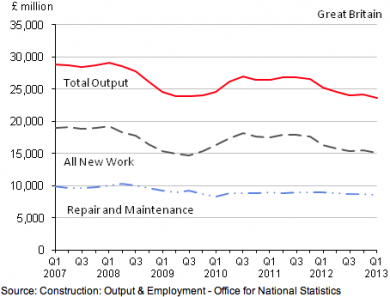 Comparing the first three months to a year ago construction output decreased by 6.5%. New work was lower by 7.8% with large falls in public other new work and private-commercial other new work, which reported decreases of 19.2% and 7.8% respectively.

Simon Rawlinson, head of strategic research, EC Harris, said:  “The contrast with last week’s better than expected GDP data only serves to emphasise the continuing plight of the industry and the disconnect from any emerging recovery seen in the services sector.

“Recent profit warnings from Balfour Beatty and Morgan Sindall are a further indication of the impact the continuing downturn on the health of the industry.”

He said: “Activity fell in all new build sectors over the quarter.  This is not a good sign, but much of this decline will have been weather related, and the monthly data from March shows a substantial rebound in private housing, infrastructure and commercial as contractors sought to make up for lost time.

“Improved new orders data from the end of 2012 suggested that activity levels may start to edge up – albeit at a very modest clip.

“There is little sign of acceleration yet, but given encouraging sounds from the house builders and low levels of investment elsewhere in the UK economy, residential construction may well turn out to be the brightest of a set of otherwise dull sectors in during 2013.”

Andrew Duncan, managing director of property at the global programme management consultancy Turner & Townsend, said: “After a brief burst of growth at the end of last year, the construction industry started 2013 with high hopes.

“In the event it leapt out of the blocks and sprinted backwards. The numbers are now truly dire – and the construction industry will surely reclaim its position as the fall guy of the British economy.

“With total output now lower than at any time for nearly a decade and half, the news is bleak across nearly all sectors of the industry.

“The government’s hopes of the private sector pumping desperately needed money into infrastructure and helping the economy build its way to recovery look more improbable by the day.

“On this evidence, the first quarter’s growth in GDP happened in spite of, not thanks to, construction.

“But for all that, in April we have seen some signs of improving activity at the very front end of the industry. But the pipeline is long, and it will take a long time for this to translate into significant growth.

“The industry has been forced to accept these tough conditions as the new norm, and has adapted accordingly.

“As the big players are being forced to pitch for smaller projects, those in the “squeezed middle” are having to slash margins to negligible levels – and in the most extreme cases, some firms are pitching for work at below cost, simply to keep cash-flow coming in.

“This is clearly unsustainable in the long term. The one consolation for the industry is that the worst may be over.

“But after falling so far, it has a long way to go to get back on its feet.”

Development joint venture will see at least 2,800 homes built across the county
12 hours ago