Concrete teams working for contractors Morgan Sindall, Vinci and Bachy Soletanche spent 29 days with the help of Cemex UK continuously pouring concrete into the slipform shutter of the shaft.

Three cranes delivered concrete to three skips to pour into the 80m deep shaft demanding a total of 11,000m3 of concrete to the scheme.

The concrete also contained 500 tonnes of steel fibres as reinforcement. 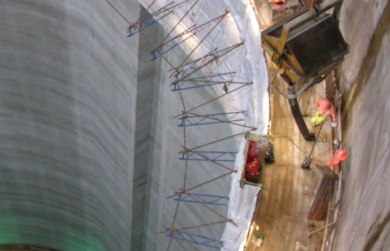 Chris Leese, vice president, Readymix and Mortars, said: “This was a tremendous achievement with nine concrete mixes of different levels of retardation supplied on a regular and continuous basis to form an integral part of this vital structure.

“The materials have been developed using the latest technology and challenge our expertise, to ensure that we can meet the structural requirements of the tunnel.”