The £4bn scheme will see the shopping centre in Hendon doubled in size along with the large-scale regeneration of the Cricklewood area in north London.

Hammerson will also build a new pedestrian bridge over the North Circular Road and speed up delivery of some of the major transport improvements.

The existing centre will be fully refurbished with new stores, hotels, restaurants and leisure facilities built on the land of the current surface car parking, with new multi-storey car parks freeing the space. 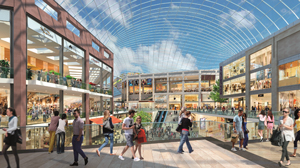 Mike McGuinness, Development Director at Hammerson, said: “These amendments will create a world class destination for shopping, dining and leisure as part of a new town centre for the area which will be delivered over the coming years.

“A network of covered streets and spaces at Brent Cross will provide a fantastic environment for shoppers and local people alike and a new wide green bridge over the North Circular Road for pedestrians and cyclists only will unite both sides of the road.

“Tens of millions of pounds are also committed to transport improvements across the whole and we are proposing to bring forward many of these works into the first phase so that the whole regeneration plan can move forward.”

The plans will now go on public display before being finalised and submitted to Barnet Council later this year as an amendment to the current outline planning permission granted in 2010.