The terminal building is to be increased in size to include more shops, offices and a larger security area that the airport said will allow passengers to move through faster.

This £25m terminal expansion is the first part of a £150m investment in the airport over the next five years, the airport said. The extension will be built over airport’s coach park, close to the new tram stop. 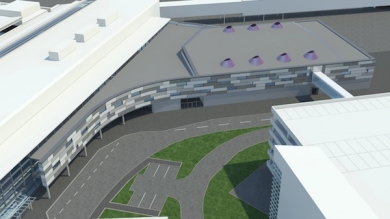 Building work is due to start in October and will create more than 100 jobs.

The new security area is expected to open late next year, with the shopping area following in 2015.

Gordon Dewar, Edinburgh Airport chief executive, said: “Our expansion is a significant mark of our intent to transform our customers’ experience of Edinburgh Airport through high-quality facilities, outstanding customer service and one of the best direct international route networks in Europe.

“This investment is the first of a number of developments that will build Edinburgh Airport’s profile around the world, helping us to compete more energetically with other UK airports and those in mainland Europe.”