The scheme will see demolition to two major buildings next to Blackfriars Bridge to clear the way for nine buildings ranging from 5 to 48 storeys in height. 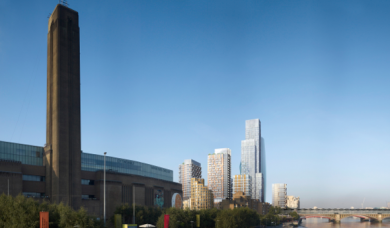 In addition, the London Borough of Southwark, the Greater London Authority and Transport for London will benefit from a £75m Section 106 investment.

This includes a £65m affordable housing contribution, equivalent to the policy requirement for 35% of affordable homes.

At 48 storeys, the tallest tower will stand opposite developer St George’s bevelled One Blackfriars tower, now under construction, to form a high-rise gateway on the south side of Blackfriars Bridge.

The project attracted opposition from The City of London and English Heritage and because of its scale will go before the Mayor of London and possibly the Communities Secretary before getting the final go-ahead.

Three of the new buildings will be on the western side of the site, where the current Ludgate House office stands, with the remaining six constructed on the eastern location where the Sampson House block currently stands.

The masterplan delivers large areas of new open space for residents and their families, as well visitors to the South Bank. The most prominent of these will be a new 16,250 sq ft square.

Mark Harris, managing director at The Carlyle Group, said: “The site, which is right on the river, is currently extremely under-utilised from a physical, social, employment as well as cultural perspective and the support we have received from the local community and Southwark Council throughout this process, and last night, endorses our belief in the need for change.

“This is a once in a generation opportunity to create a vibrant new destination area, with homes, retail and leisure facilities which brings thousands of new jobs to the area, while at the same time allowing us to make a significant contribution to Southwark’s wider housing requirements.”