The latest forecast from the Construction Products Association anticipates the £111bn construction industry will enjoy a whopping 19% growth by 2017.

This equates to a £20bn expansion of activity over the four years with housing and energy and transport infrastructure leading the boom.

Economists have torn up previous forecasts to upwardly revise predictions after the housing industry kicked into gear over the summer.

Noble Francis, Economics Director of the CPA, said: “Construction is set to enjoy growth over the next four years as it recovers from its worst recession in over 35 years.

“This is mainly due to private housing, which is experiencing a rapid rise, and infrastructure, which is seeing a more gradual return to positive territory.” 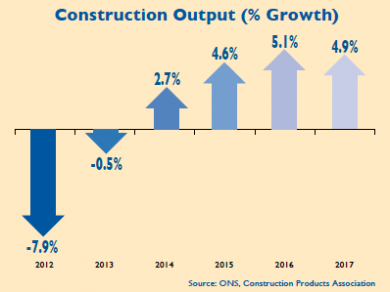 Francis added: “The private housing sector is being driven by recovery in the wider economy and the impacts of policies including Help to Buy, which have driven both house prices and house building.

“Although rapid growth is predicted over the next 18 months, uncertainty remains around what will happen when the policies end, given that the housing market is unlikely to be self-sustaining by then.”

He said that the infrastructure sector was also recovering from a very difficult 2012, when output fell 12.7% despite numerous government announcements of boosts to the sector.

“Government now appears, however, to be refocusing capital investment towards repairs and renewals.  In addition, work on Europe’s largest construction project, Crossrail, is expected to peak over the next 18 months.  As a result, growth of 7.4% is forecast in 2014.

“In the longer-term, the prospects for infrastructure will be reliant upon investment in the replacement of energy capacity across nuclear, offshore wind, gas and shale, all of which remain uncertain.  Driven by this investment, we predict the sector will enjoy further growth of 27.9% between 2015 and 2017.”

But some other key sectors will continue to struggle. Work in the largest sector of commercial (offices and retail) remains one-third lower than its high in 2007, while public sector construction, which accounts for one-third of total industry output, continues to constrain overall growth.

“After suffering from an extremely tough market for over five years, and acting as a drag on UK economic activity, construction is set to grow every year between 2014 and 2017.  This should provide a considerable boost to the wider economy,” said Francis.

Town centre 8-acre site is earmarked for 1,200 homes, shops and leisute
4 hours ago