The deal will see the Government guarantee to pay a strike price for electricity which is nearly double today’s going wholesale rate.

The move will bring to an end over a year of delay, which has left contractors with teams on stand-by to mobilise.

Anna Stewart, Group Chief Executive for Laing O’Rourke, said: “This is a pivotal moment for the UK construction industry as we move forward with EDF towards mobilisation and the start of work on site.”

“Hinkley Point C will open up a myriad of opportunities for employment, new skills and training, and engagement with the supply chain across the UK, but especially in the South West of England.“

Once a Final Investment Decision is announced by EDF, contractors will move swiftly to establish site teams and commence work.

The workforce will be housed in three campus sites with also offices for around 1,000 engineers and contractors.

It also sets a minimum craft rate of £13 an hour for civil engineering work and bonus payments to establish the job as the best-paid site in the UK.

Some 5 Tier One contracts have been let subject to contract a further 145 are to come. 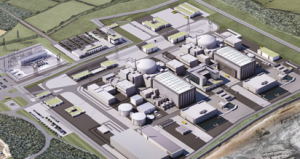 Land area of and energy output from Hinkley Point C compared to other energy production sites. 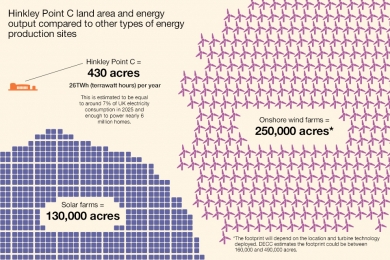