The victim and a colleague were airlifted to hospital following the crash when a lorry overturned between junctions 24 and 25 on Friday morning.

The lorry driver has been arrested on suspicion of causing serious injury by dangerous driving.

The East of England Ambulance Service said: “One casualty has suffered life threatening leg injuries and has been airlifted to Addenbrookes Hospital, a second casualty is in a stable condition and has been conveyed by land to Chase Farm Hospital.”

Another worker received minor injuries in the accident and was treated at the scene.

The Highways Agency said: “The M25 was closed in both directions this morning following an incident in which an HGV overturned, crossing the central reservation.

“Three roadworkers were injured in the incident. The Highways Agency’s thoughts are with those involved, and their family, friends and colleagues.” 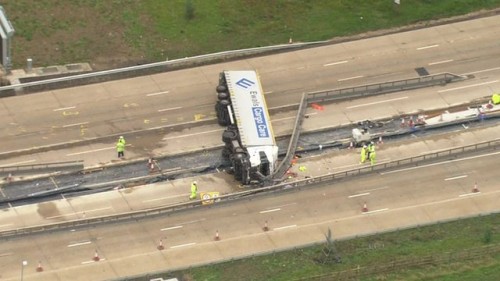 Picture courtesy of the BBC 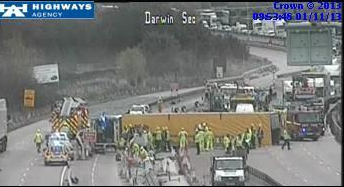 Sites in Redbridge, Ipswich and Milton Keynes to be developed
4 days ago