The smart motorways scheme is the first of its kind in the North West and has been priced between £190m and £267m.

It will be introduced on a 17-mile stretch of the network between Junction 8 of the M60 near Sale and Junction 20 of the M62 near Rochdale.

The system will use the latest technology to monitor traffic levels, provide traffic information to road users, and ease congestion by using variable speed limits on overhead signs.

The hard shoulder will also be permanently converted into an extra lane on a five-mile stretch of the M62 between Junctions 18 and 20 to provide extra capacity on the part of the motorway which links the North West to Yorkshire.

Emergency refuge areas will be created on this section of motorway with overhead signs used to alert motorists of lane closures and incidents ahead, clearing lanes to allow emergency vehicles to get through. 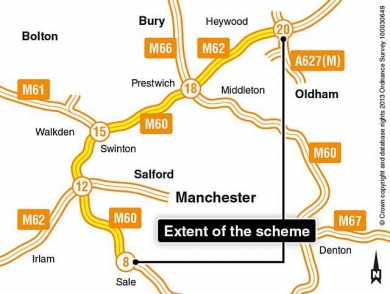 The Highways Agency is also analysing the environmental impact of increasing lane capacity between Junctions 8 and 15 of the M60, which is currently made up of two and three-lane carriageways.

This could include converting the hard shoulder to an extra lane, but the potential impact on local communities will need further assessment to ensure there is no adverse impact to the local environment.

A similar project recently completed on the M62 near Leeds and is making journeys better and reducing congestion.

Jacqui Allen, Senior Project Manager at the Highways Agency, said: “More than 180,000 vehicles use the section of motorway between Junction 8 of the M60 and Junction 20 of the M62 every day, causing heavy congestion and unpredictable journey times.

The new smart motorway system will help tackle these issues as well as improving safety on the network.

“Converting the hard shoulder to an extra lane on the section of the M62 between Junctions 18 and 20 will also provide much-needed additional capacity, increasing the number of lanes on each side of the motorway from three to four.

“We’ll be holding several events and discussions over the next few months where motorists, residents and businesses will be able to find out more about the scheme and its benefits, and I’d encourage people to take part.”