Under the pair’s plan Croydon’s Whitgift Centre will be rebuilt to offer a 1.5m sq ft retail, leisure and restaurant destination, together with new public realm, car parking and up to 600 homes.

The rival developers had been in deadlock over the redevelopment of the town centre, before agreeing on the 50/50 joint venture named The Croydon Partnership earlier this year.

Detailed designs for the scheme will be unveiled during 2014 and a start on site is expected in 2015.

The planning approval is part of the Partnership’s wider 2m sq ft vision to regenerate the town centre, including the adjacent Centrale shopping centre, which has planning consent for a refurbishment programme. 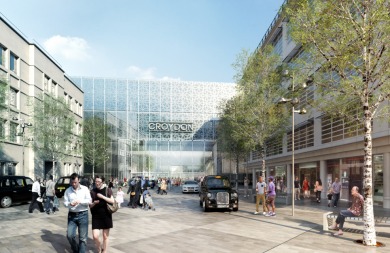 The scheme will also provide over £30m towards local transport improvements and employment and training benefits.

John Burton, Director of Development of Westfield, said:  “We believe that our proposed £1bn investment into the transformation of Croydon’s shopping and leisure offer has the potential to act as a major catalyst for the wider physical and social regeneration of the town.”

Peter Cole, Chief Investment Officer of Hammerson, added:  “Our scheme will re-establish Croydon as the retail destination of South London which will attract further investment and development. Tonight’s decision brings that vision one step closer to reality.”