The scheme, which will be completed in two stages, will include increasing the overall height of the South and North stands to allow an additional 6,250 seats in each stand.

Laing O’Rourke is believed to be lined-up as construction partner and is currently working with the club on its regeneration plans in Beswick.

The capacity of the Etihad Stadium is currently around 47,500 but will rise to 62,170 when the project is finished – making it the second biggest venue in the Premier League.

The architect behind the Olympic Stadium, Populous, have produced the designs and the club hope work will begin in February.

The football club launched a consultation exercise with fans and local residents ahead of putting in a planning application in July. 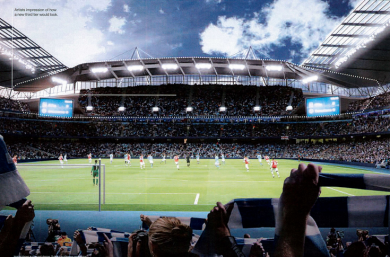