Approval was gained for a 54,00 sq ft  healthcare facility on the last remaining plot at the site.

The total cost of developing the former home of BBC Birmingham is about £200m.

The redeveloped 27-acre site will employ more than 1,000 people when it is completed, the developers said.

Late last year Galliford Try started work on a £50m dental hospital and school of dentistry, which are scheduled to open in autumn 2015. 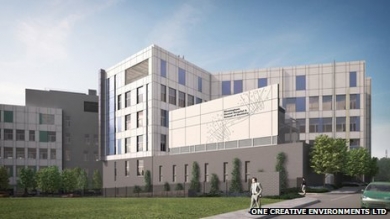 A Bupa care home and 161,400 sq ft private hospital  for Circle Health have already been approved for other parts of the site, although no builders have been appointed yet.

Ralph Minott, director of development for the Edgbaston-based company,  said: “This represents the final piece of the jigsaw for Pebble Mill.

“With this latest announcement it is clear the vision behind this project is being realised.

“Construction is under way on the dental hospital and school of dentistry and the final infrastructure works are being completed on site.

“Work is expected to start on the Bupa home later in the spring and the regeneration of Pebble Mill is gathering serious momentum, while raising the bar as a pinnacle of healthcare provision.”

Materials and product Inflation tops 20% so far this year, but labour set to be next big headache
13 hours ago

Around 450 staff have on average received over £6,000 since move to employee ownership five years ago
14 hours ago

Next generation framework for jobs up to £7.5m employs a parallel plotting structure
14 hours ago