CITB Fairness,Inclusion and Respect Manager Kate Lloyd condemned the hoarding around the Malmaison site as “depressing and highly insulting”.

Lloyd’s comments follows criticism from writer Jeanette Winterson, who compared pictures of a model holding power tools to those of “soft-porn babes”.

A Malmaison spokesman told the BBC  it was “meant to be a bit of fun”.

But Lloyd said the images on the hoarding “only serve to set us back”.

She added: “The CITB has for years been challenging stereotypes around women in the industry and trying to encourage females of all ages to consider careers in the sector.”

She said 12% of the construction workforce were women, of whom 1% worked in manual trades.

Lloyd said: “We are missing out on a huge range of talent and skills that the industry would benefit from because construction is still largely seen as a ‘job for the boys'”

Winterson wrote in the Guardian about her “outrage” at seeing the “Mal at Work” hoarding, when staying at the city centre hotel last week. 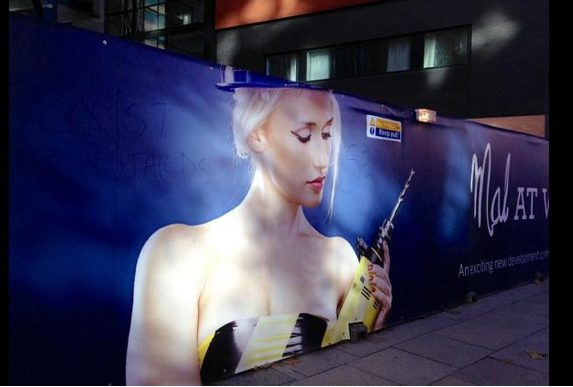 A male model also features on the Malmaison hoarding in Manchester

Winterson said: “He’s all muscle and sweat. He’s a hunk, sure, but the visual message he offers is not confusing to men.

“He’s about power and prowess, muscle and machismo. The hard-hat babes send out a message that aligns with male fantasy not female reality. And that’s a problem.”

The spokesman for the hotel chain said it was “meant to be a bit of fun with both men and women depicted to highlight our construction”.

“No offence was meant and we apologise if it’s been taken the wrong way,” he said.

“It’s made a lot of people smile and not too many frown.”

Design and delivery partner will manage design and construction of £4.5bn next leg to Crewe
7 mins ago

Construction waste boss banned from being a director

Green light for first major reservoir for a decade