Construction analysts Glenigan predicts a flourishing commercial sector will take over as the main growth driver next year.

It says that underlying project starts are set to rise by 8% this year, primarily due to an uplift in private housing and non-residential building projects.

The office sector will dominate activity next year, with a 23% rise in project starts anticipated following relatively steady growth of 8% this year. 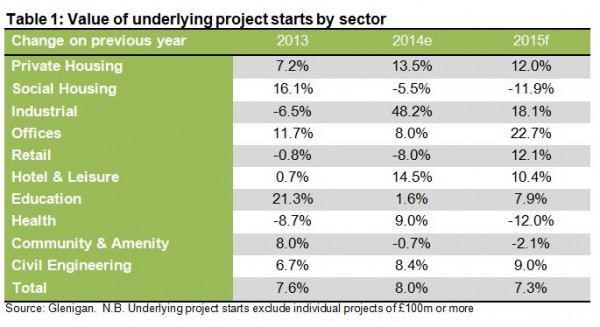 Office starts are expected to pick up in major metropolitan areas as the demand for more quality office space spreads beyond London.

Retail and leisure project growth is also forecast to be spread widely across the UK as consumer spending picks up across the country.

The residential market will remain an important engine for construction growth, with private housing project starts due to rise by 12% in 2015.

Activity is expected to ripple out from London and the South East as faster average earnings growth further strengthens consumer spending and confidence.

Following a strong rise in detailed planning approvals last year, industrial starts are on track to rise by around 50% during 2014, with 18% growth anticipated for next year.

In contrast, government-funded investment generally remains constrained. Social housing starts are a particular weak spot, with the value of project starts falling by 5% this year and a further 12% decline forecast for 2015.

London remains an important growth area, but the north of England and Wales have seen the fastest pace of growth in 2014.

Strong regional growth is forecast for the West Midlands in next year, while Scotland is expected to bounce back as projects deferred in the run up to the independence referendum vote get underway.

Prequalification for £5.2bn-£7.2bn route to Crewe put back to September
3 hours ago

Galliford Try gets go-ahead for next A47 dualling job