Philip Evans was working for subcontractor London Fenestration Trades Ltd on the Sir Robert McAlpine job to repair a glass façade above an entrance to a department store in Exeter on 9th November 2011.

While a colleague worked on a higher part of the curtain wall from a mobile working platform, Evans worked from the glass canopy to attach the lower fixings.

During the course of this work, he walked along the canopy from right to left and fell through an opening above the Bedford Street entrance of the Debenhams store. 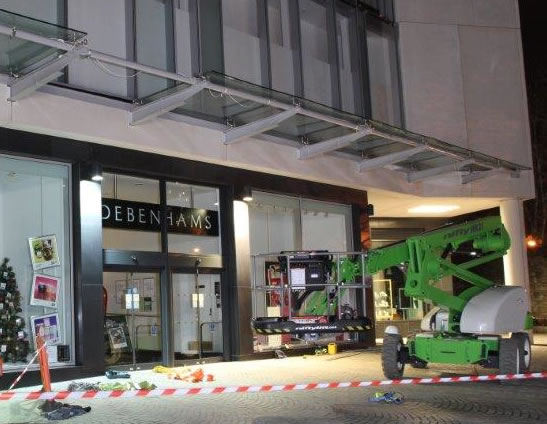 The gap in the glass canopy can clearly be seen

During the HSE prosecution Exeter Crown Court heard the opening had been created during previous maintenance works when a pane of glass was removed from the canopy and had not been replaced.

Evans, from Penarth, South Glamorgan fell approximately 4.5metres through the canopy on to the granite setts below.

He received serious injuries as a result of the fall and died later in hospital.

The subsequent HSE investigation found the mobile platform provided was inadequate for the work being carried out.

The glass canopy on which Evans was working was not a safe working platform as there was no edge protection and there was the large opening through which he subsequently fell.

The court was also told neither of the two workers should have left the safety of the working platform basket.

“Planning and effective coordination between contractors is a requirement of the relevant safety regulations.

“Without such planning and sufficient assessment of risk, it is foreseeable that working at height will expose operatives to risks to their safety.

“In this case Mr Evans was working from an unsafe position which exposed him to the potential of falling from the edge of the glass canopy as well as the opening through which he tragically fell.

London Fenestration Trades Ltd of Grangetown, Cardiff also pleaded guilty but as the firm is in liquidation the court could only notionally fine it £200,000 with £17,790 costs.

5,000 staff at Oxfordshire based firm to join WSP
51 mins ago

Plan for trio of towers at old Yorkshire Post site

Inflationary pressures likely to peak this year before easing in 2023, but supply chain stress is growing.
4 days ago

Devonshire Gardens will consist of 70 private rental flats and 120,000 sq ft of offices
4 days ago

Taylor Wimpey staff to get £1,000 towards fuel bills

All staff earning below £70,000 will receive a one-off payment
6 days ago