Skanska, which is managing the project, gained approval today after the first chimney rebuild was signed off at 25m above the highest point of the wash tower brickwork.

This is halfway towards the full replacement, but it was a planning condition the milestone was met before the remaining three chimney’s could be demolished and rebuilt. 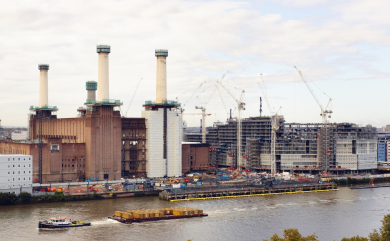 Rob Tincknell, Chief Executive Officer at BPSDC, said: “Reaching the halfway point on the first chimney to be rebuilt is another significant milestone for everyone involved in the redevelopment of Battersea Power Station.

“We are very proud of this achievement and with work to start soon on the other three chimneys, I would like to offer the teams on site every best wish for the rest of the project.”

Once the rebuild work is completed next summer, all four chimneys will be painted in their original colour. 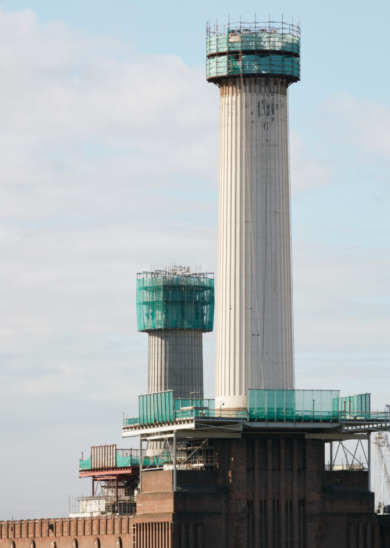 Each new chimney will be visually identical to the original, the only difference being that the new chimneys will use a more modern pattern of steel reinforcement within the concrete.

At the start of 2014, the preparatory works took place on the South West chimney. The dismantling process involves a circular rig slowly moving its way down the chimney from the top – with debris funnelled down a chute in the centre of the chimney.

Since mid-May, the rebuild programme has been underway inside the brick wash tower to recast and set the first 10m of the new chimney.

The rebuild process involves pouring concrete into a set of wooden shutters measuring 1.22m in height. The lift section is left to set for 24 hours.

The seventh ‘lift’ was the first to appear out of the brickwork of the wash tower and back onto the London skyline.

In total, running vertically through the concrete sections will be approximately 70 tonnes of steel reinforcement bars that are set into the concrete in two concentric rings It will take about 6 months to fully rebuild the chimney to match the original height of 101m.

The chimneys will remain in their grey concrete–fluted form as they did when they were first built until all are completed.

Paint scrapings have been taken to ensure that the new chimneys will then be repainted in the same original colour.

Site preparation gets underway for Keynsham Recycling Hub
37 mins ago