The project, previously known as the Croxley Rail Link, will support growth and regeneration in and around Watford by making journeys to and from London easier.

A full funding package for the extension has now been agreed between the Department for Transport, Hertfordshire County Council and Transport for London.

This sees TfL take control for delivering the previously stalled project from the county council. Taylor Woodrow, which had an existing design and build deal with the council, will continue to deliver detailed design and enabling works.

But London Underground is now expected to go out to tender for a main contractor early next year on the bulk of project. 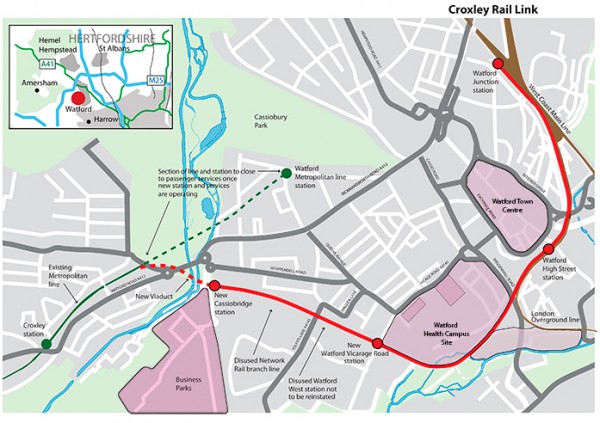 A key part of the project will be a new 3km stretch of line that includes building 400m new viaduct to take take the line over the Watford Road dual carriageway and the Grand Union Canal.

It will then link to an 1.5km stretch of existing but disused branch line route which will see two new stations built at Cassiobridge and Watford Vicarage Road before linking into Watford junction.

Nick Brown, Managing Director of LU, said: “For 100 years, the Tube has been enabling growth in ‘Metro-land’ and this new part of the Underground network will support further rapid development in the area.

“By 2020 we will have built a 400m viaduct, two completely new stations and numerous new and reconstructed bridges along the route, transforming transport links in Watford.

“With the funding package complete we’re now turning all our attention to appointing contractors, finalising designs and beginning construction in 2016.”

Manny Lewis, Managing Director for Watford Borough Council, said: “The Metropolitan Line Extension to Watford is a key transformational project for the town.

“The extended Metropolitan Line will bring over £1.4bn of investment into the town, helping create thousands of jobs by supporting the delivery of major projects like the Watford Health Campus, Watford Business Park, Ascot Road and the redevelopment of Charter Place Shopping Centre.”