According to new research by cost consultant Arcadis concern about the viability of schemes in the overheating construction market is starting to hit workloads.

The cost of building an international 5-star hotel is now 20% higher in London than in Paris, and 50% higher than in Dubai, estimates the latest Arcadis International Construction Costs Index.

It also reports that supply chain insolvencies are on the rise. And clients are getting the jitters as cash-flow failures, problem projects and lack of control over the supply chain are becoming ever more prevalent issues.

Simon Light, Arcadis UK Client Development Director, said that these factors have conspired to reduce the certainty of delivery, just as the development industry has being asked to pay an additional premium to build.

He said: “In London, the synchronised recovery is losing momentum.

“With inflated construction costs and high land values threatening the viability of commercial and residential development, workloads look to be losing steam even before the capital’s infrastructure boom really takes flight.

Light added: “There is now much more focus on agreeing prices prior to starting on site, ensuring no loss of value should current construction volumes be maintained.

Yet despite rapidly growing costs, Arcadis believes the London market remains attractive to international investors, with the strength of the US dollar in particular putting US investors in a positive position.

As prime areas of the city are no longer as profitable to build in, demand is rippling outwards to sub-prime areas in London, and other cities like Birmingham and Manchester, where the potential for long-term development value is greater. 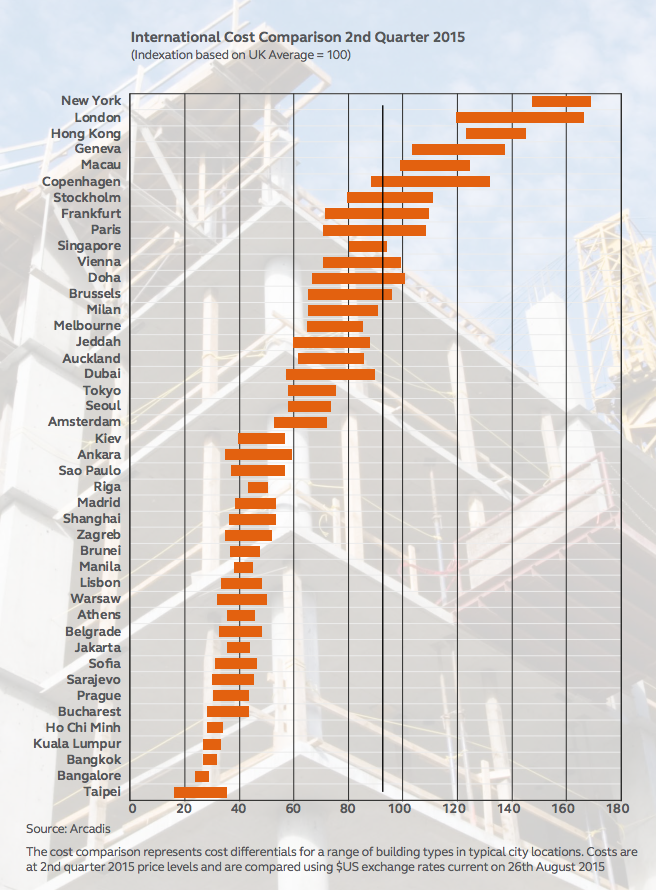 Across the globe, financial hubs New York and Hong Kong join London as the costliest locations for construction in the world, with cost premiums in these cities ranging from 40% to 60% in comparison with other European counterparts.

Middle Eastern commercial centres meanwhile, remain around the mid-point of the rankings, with the likes of Doha (12th) and Dubai (19th) continuing to benefit from low-cost labour and energy.